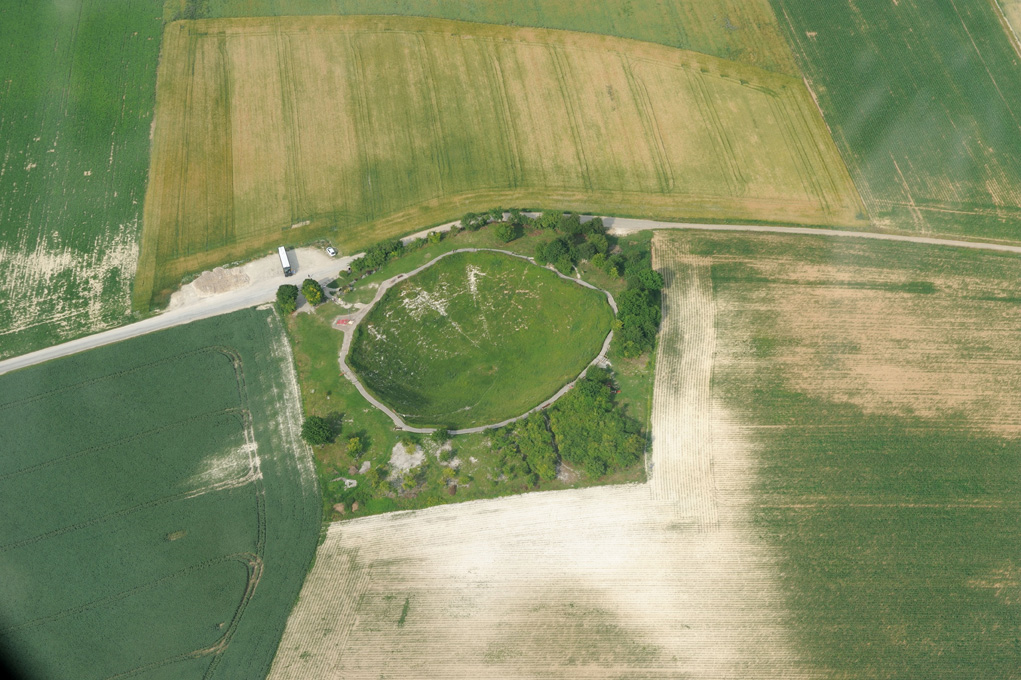 La Boisselle, « Lochnagar Crater », is an impressive mine crater of 100 metres in diameter and 30 meters deep. It is a vestige of a serie of explosions that occurred on the 1st of July 1916. Here at 7:28am took place an event that marked and set off the Battle of the Somme British offensive.

The First British lines perpendicularly crossed the main road, all the way to the current Irish Tyneside and Scottish Tyneside brigade monument. It’s from that location that men from their units leapt out from their starting positions, the 1st of July 1916, at 7:30am. No one could have known that they were charging towards their own imminent deaths. French and Germans had started to dig their trenches in October 1914, and as of that winter, a long war of mines had begun. The bloated soil of the paddock situated by Contalmaison Road reminds us of this particular phase of the conflict.

The 1st of July 1916, just a few minutes before the offensive, multiple explosions under the German lines created deep craters, identical to the one in La Boiselle: “The Lochnagar Crater”.

The village of Pozieres marks the first major commitment of Australian troops (Memorial to the first and second Australian Divisions). Vestiges of the « Gibraltar » blockhouse are still visible. Also in Pozieres, you may visit a memorial to the tanks, which shows four reduced tank models.

The village was the lock which needed to be destroyed to take the Mouquet Farm, then Thiepval hill. This objective was majorly given to the Australian troops where most of them had already fought in Gallipoli.

The village was situated on a ridge crossed by a double network of trenches forming the second German line and flanked by two bunker-observatories with outlooks over the battlefield (Albert side, “Gibraltar” – Bapaume side, the “Windmill”). The Australians arrived on the 23rd of July 1916, taking over Pozieres. After 2 weeks of nonstop artillery counter attacks, they were finally relieved by Canadians on the 5 of September at the Mouquet Farm.

Three Australian Divisions fought in the Pozieres sector. The cost had been enormous, and in the words of Australian official historian Charles Bean, the Pozieres ridge “is more densely sown with Australian sacrifice than any other place on earth.”Pozieres had become so well-known and taken such a place in Remembrance that a small town in Queensland was given its name after the war.

On the 15th of September, tanks were used for the first time on the battlefields. 32 British Mark I tanks were deployed on the Courcelette-Longueval line, only nine reached their objectives. Nonetheless, that date truly marked the beginning of progression in terms of military technology.

The road that leads to the monument corresponds to the first German trench which was highly defended by the Gibraltar blockhouse. Its foundations are still visible.  It was built in an old cellar which was fortified and the entrance reinforced with concrete.

THE FRANCO-BRITISH MEMORIAL TO THE MISSING - Thiepval 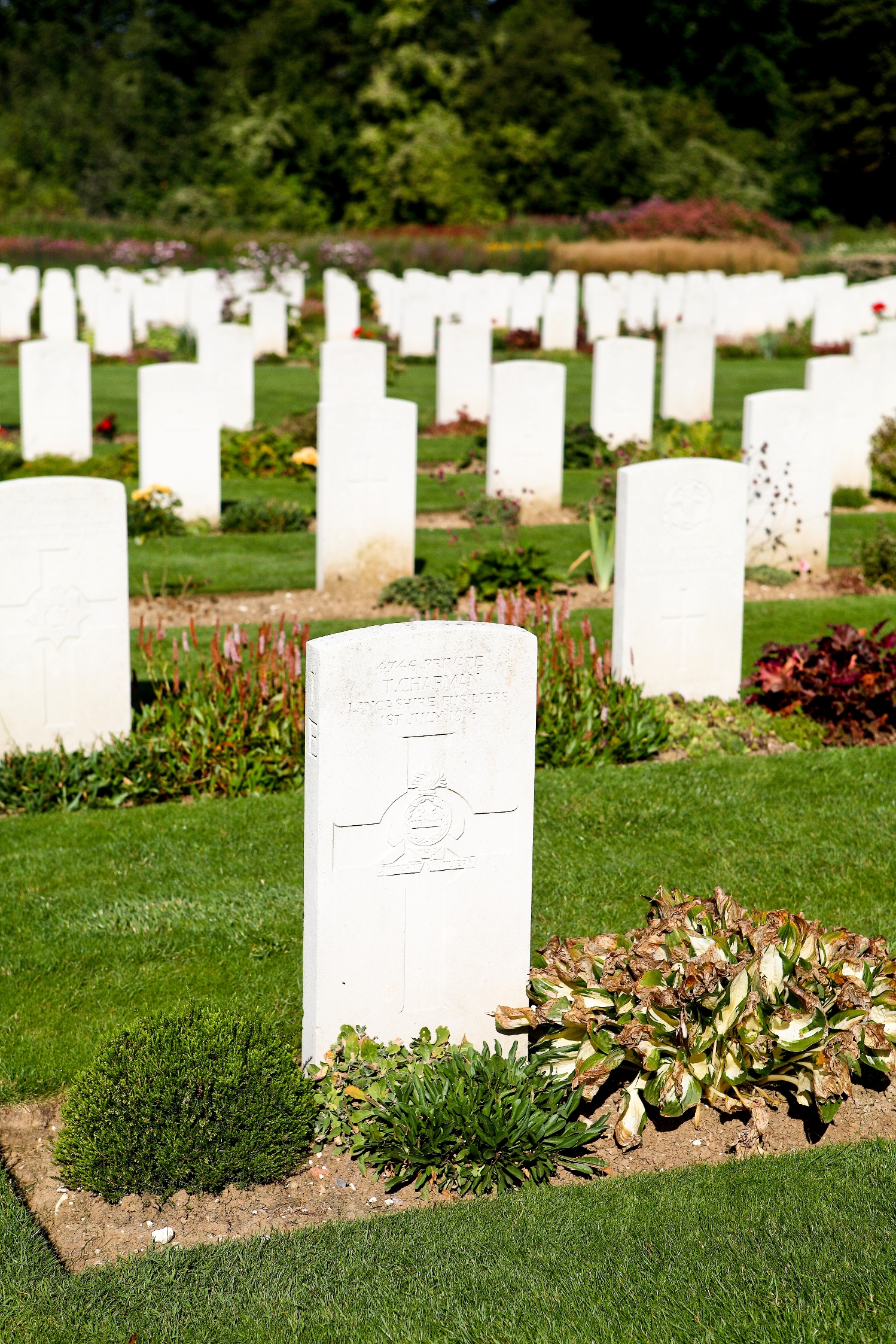 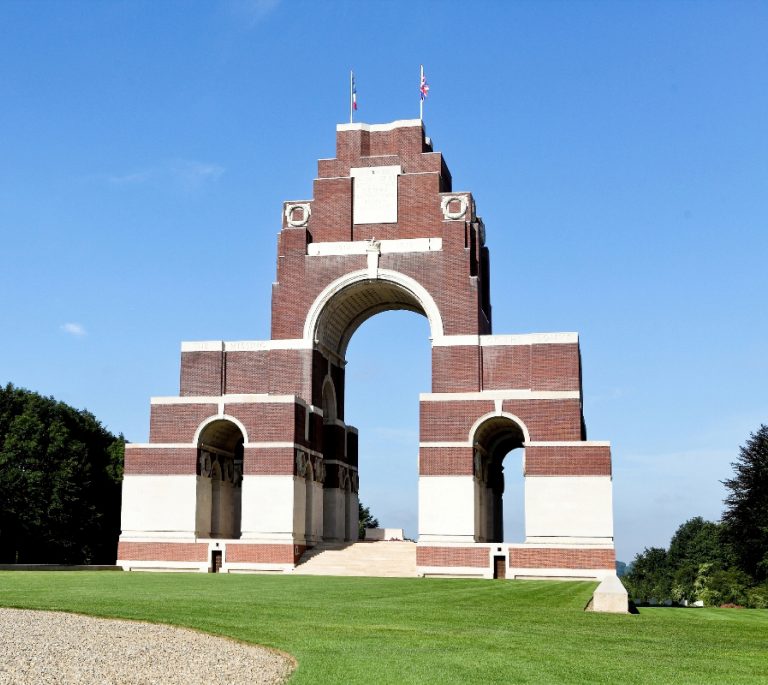 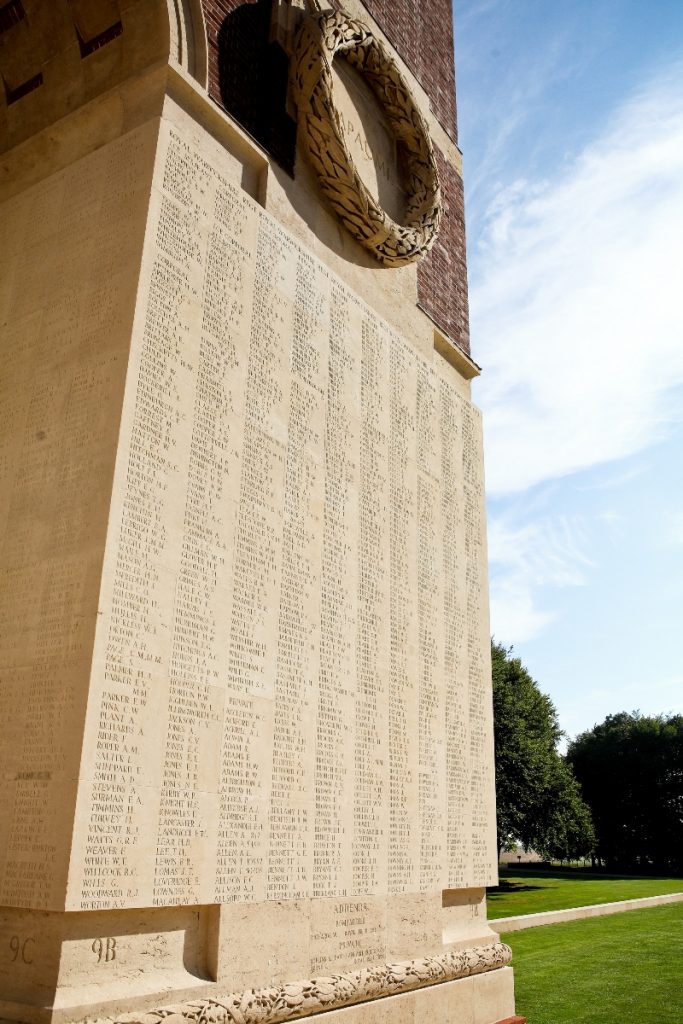 In 1916, Thiepval hill, the village and the now vanished Château, along with Hamel were considered to be a very strong hold of the German defence, in the Northern British sector. This absolute natural fortress was protected at its foot by the swamped area of the Ancre River and by many deep tunnels. This constituted the Leipzig Salient and was, on the 1st of July, one of the main witnesses to a disaster to the British left wing. That day, the British suffered 58,000 casualties, 20,000 of them killed, making this the worst day ever to this date for British losses to which the name Thiepval will forever be linked to.

Since 2004, a Visitors Centre had opened its doors just beside the most visited and most symbolic Memorials of the Great War. Combining their efforts, the project became reality thanks to the Somme General Council and « The Thiepval Project » (which raised a national subscription in Britain to raise funds), with the support of the European Union. As well as main services (information desk, shop, projection room, drink distributors, toilets), it also offers an educational display for visitors to find the necessary key elements to fully understand the Battles that occurred in the Somme as well as Thiepval’s history during World War I.

In 2016, a new museum opened up next to the visitor center.

This imposing brick and stone structure rises 45 metres above ground and can be seen kilometres away.

Standing on 16 pillars, the monument shelters the names of 73367 missing British and South African soldiers who fell during the Battle of the Somme and have no known grave. The youngest soldier known to be engraved in the Memorialis Reginald Giles, 14 years old, from the Gloucester Regiment, killed on the 20th of August 1916 at High Wood about ten kilometres from the Memorial of the Missing. 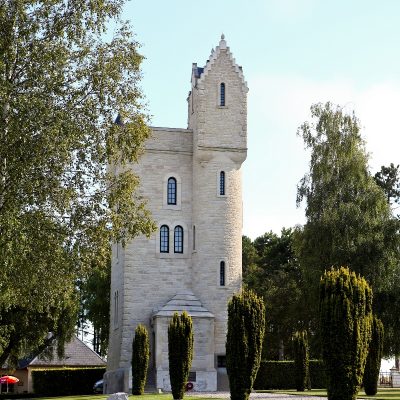 The Ulster Tower is a British memorial, located on the territory of the municipality of Thiepval, dedicated to the soldiers of Northern Ireland who died in the Somme during the Great War.

The 36th Ulster Division who operated from Thiepval Wood through to Hamel, were the only troops to have reached their objectives on the 1st of July 1916. Once reaching the German trenches they’d find themselves trapped. Not just suffering loss from finding themselves under their own crawling barrage but also that of heavy German machine gun fire which German soldiers took out of their dugouts at Souabes Redoubt. After having lost over 5,500 men in just a few hours, the division had to be evacuated the next day.

The Ulster Tower was built in 1921 thanks to a public funding. 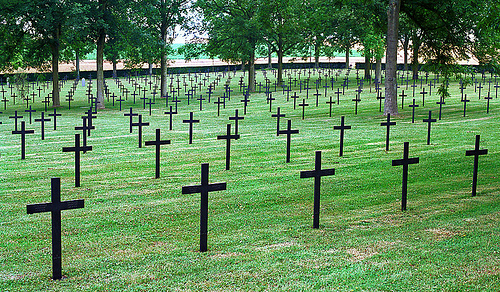 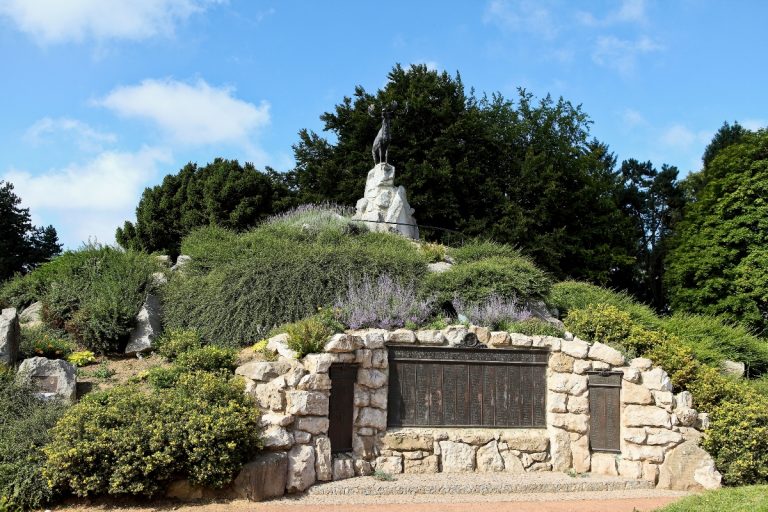 Newfoundland is a Canadian province (since 1949) that includes both Newfoundland Island and the North–East of Labrador. During the Great War, Newfoundland raised an army of volunteers, as did other countries of the British Empire.

More than 6000 men served in the Royal Newfoundland Regiment and 1305 fell during the conflict. Today, the battlefield has been preserved and has kept its traces of the battle. After the war, the Newfoundland government bought the 16 hectares of land to create a memorial in honour of these men.

The park is open every day and entry is free. It starts with the 29th Division monument to which the Newfoundland regiment was part of. The path then leads you to an orientation table, at the top of the Caribou (Newfoundland Regiment symbol) monument where visitors have a superb view of the battlefield. This statue was made by the English sculptor Basil Gotto. The elevated monument which overlooks St John’s Road, name given to the trench from which the Newfoundland went over the top on the 1st of July 1916. At the foot of the monument, there are three bronze plaques on which the names of the 814 Newfoundland men who fell in world war 1 without any known graves, are engraved.

The park itself is a significant battle field of the Great War: with trenches, devastated landscape riddled with bomb craters, corkscrew pickets for the barbedwire… It was not until the 13th of November 1916 that the 51st division finally took over the German trenches of Beaumont Hamel. A monument dedicated to the Scottish Highlanders stands at the end of the park.

It dominates the « Y Ravine » with a soldier wearing a kilt looking over the old German lines. It is here too that a cross was erected in memory of officers and men from the 51st Division who fought at « High Wood » in July 1916. 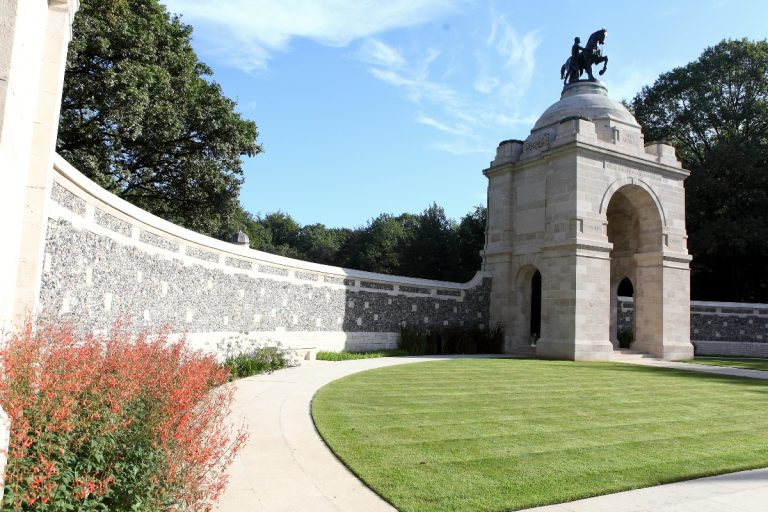 Taking over Delville Wood (Battlefield, memorial, museum and necropolis) also called Devil Wood, became essential to make any further progression towards the east. It was entrusted in the hands of the South Africans who were facing their first battle on the Western Front from the 15th of July to the 20th of July 1916.

Under heavy artillery – up to 400 rounds a minute -, hardly protected by their makeshift trenches, cut off from behind, they lived their worst nightmare.By the time relief arrived, out of the 3200 men who made up the brigade, only 143 were left standing.

Longueval is also a place of Remembrance to the New Zealand forces. On the 15th of September 1916 the New Zealand Division, strengthened with tanks, pushed through the Front line (between Longueval and High Wood) towards their objective: Flers, in which they succeeded that same day. High Wood was taken by the 47th London Division also on the 15th of September. Behind the memorial, built around the Cross of Consecration and inaugurated in 1986, is the museum, a replica of Fort Cap. It commemorates the South African contribution during the Great War (on the Western Front and in German African colonies), the Second World War, the Berlin Blockade (1948-1949) and the Korean War (1950-1953).

The memorial inaugurated in 1926, is situated on an avenue lined with Chestnut trees from South Africa. The Memorial contains a cenotaph (an empty tomb) and the Triumphal Arc drawn by Herbert Baker. The two houses, colonial style, represents, as described by the architect, the two South African white races, and the semi-circle, the ramparts of civilisation.

The dome is surmounted by a bronze sculpture by Alfred TURNER, representing Castor and Pollux clasping hands in friendship over a war horse’s back. Castor and Pollux are the children of Ledas and Zeus, the first is mortal, the second is divine. Their complicity was so strong that when Castor was killed, Pollux asked Zeus to let him share his own immortality with his twin to keep them together. These two characters, initially different, but holding the same destiny, symbolizes, as described by the sculptor, the true comradeship between the two South African races, the English and Dutch soldier, fraternity between the British and the Boer coming together.

Recent enemies, sacrified together for the British Commonwealth against a shared enemy. The monument was inaugurated on the 10th of October 1926, the widow of the President Louis Botha, unifier of the country after the Boer War (1899-1902) which opposed the Dutch and British colonies in South Africa.